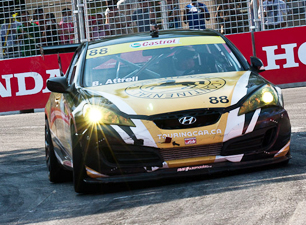 Long Island, NY – Continuing a tradition, it was yet another year in the Canadian Touring Car Championship where the front runners were all on ANZE Engineering products.

At the end of the year it was Sasha Anis winning the Championship, in a Hyundai Genesis Coupe on ANZE, while Damon Sharpe won the Touring Class title in his Honda Civic SI, also ANZE-equipped.